Tennis had fashion at the very foundation of its game right from the start. With Wimbledon just around the corner, we take a look back on Tennis’ ever evolving impact on street and sportswear.

From sewing simple crocodiles onto polos to full-blown branded collections, the realm of collaboration in tennis clothing has come a long way. Whether its Roger Federer, John McEnroe or Rene Lacoste, tennis has always been a lucrative business and, more often than not, affected how we dress away from the court.

Born in 1990 and raised in the North West of England as the son of a cotton spinner, Fred Perry is a brand we all know and love. After a professional career throughout the 1930s, in which he attained world number one status, smashed Grand Slam records and enjoyed the lifestyle of a professional sportsman, Perry turned his attention to apparel. Dating back to 1952 when the classic polo featuring an embroidered laurel wreath (the original logo for Wimbledon) was released, the polo shirt was an immediate success within the tennis fraternity. As time went on the popularity of the garment increased dramatically when it was later adopted by British working class subcultures throughout the 1960s, 70s and 80s, but Fred Perry’s name and attire would forever be linked intrinsically to Wimbledon and professional tennis. 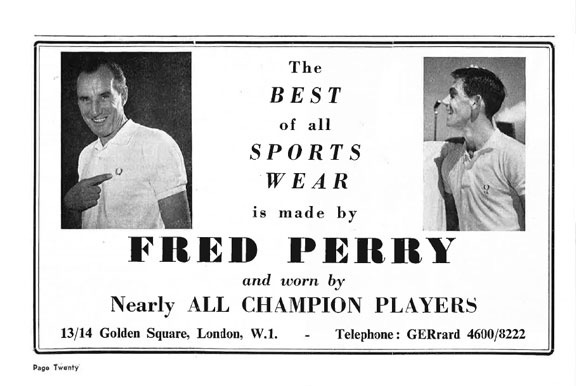 The 1960s would see a return to footwear form and innovation, with one of today’s most popular sneaker styles stepping out under, not one, but two different names before the decade was up. Switching up the traditional plimsole, adidas created a leather upper for its rubber-bottomed tennis shoe. French tennis player Robert Haillet was the first to adorn this shoe in 1964. When Haillet retired a few years later, adidas reached out to American tennis player Stan Smith in 1971. Smith left the shoe relatively unchanged from Haillet’s original model, however, it was Smith’s need for extra padding around the achilles that resulted in the sneaker’s now-iconic green heel padding. 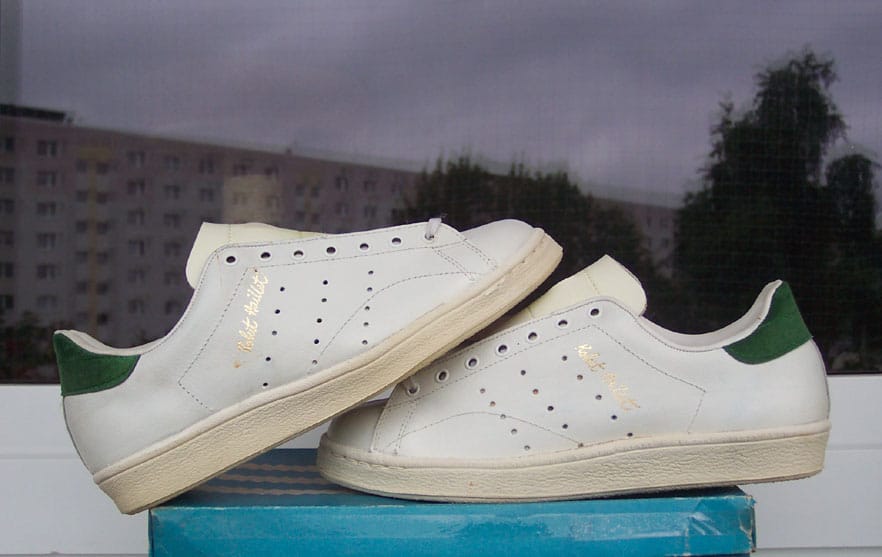 By the 1970s, a younger, more vibrant era of tennis was dawning, John McEnroe and Bjorn Borg showcased the start of a more modern on-court-meets-off-court style. This decade would also shift tennis style away from British and French labels, and place it into the hands of Italian and German designers. While McEnroe and Borg were fierce rivals, the one thing they could agree on was wearing Fila. The well-know Italian sportswear label absolutely dominated the tennis scene in the 1970s. Of course, Fila wasn’t the only Italian label taking charge during the 70s. Fila’s fellow countrymen over at Sergio Tacchini and Ellesse created court-ready clothing, while Diadora stepped in to supply pro-level sneakers that rivaled models from the three stripes. 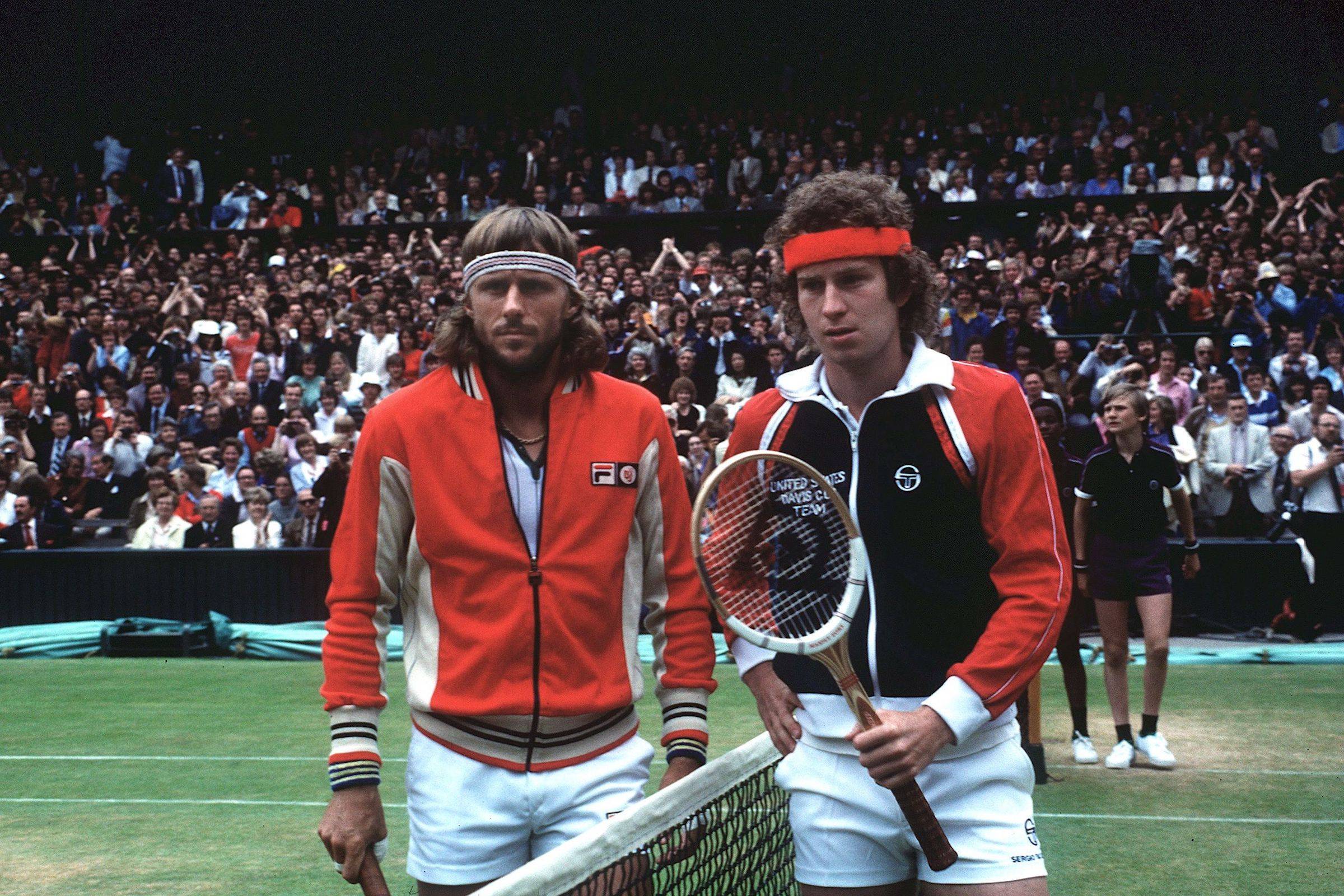 The 1980s saw the beginning of a rapidly expanding colour pallet of tennis gear when it came to major outfitters and brands. At the start of the decade, Ellesse was picking up as Fila was fading out of favour. While Fila catered almost exclusively to Borg in the 70s, it wouldn’t be until the 80s that brands would directly cater to their sponsored stars—crafting designs inspired by their personalities and their game. This was especially true when it came to the tennis scene’s rapidly rising star: Nike.

McEnroe’s attitude preceded his play, and with Nike’s penchant for picking up players who were as rebellious as its clothing would be, the addition of then-16 year old Andre Agassi in 1986 was a perfect fit. Starting out in McEnroe’s Air Trainer 1—known for its 80s gym-ready, intersectional and multi-sport design—Aggasi would branch out into his own line of footwear and apparel. His neon-soaked shirts, denim-meets-lyrca bike short bottoms, long mullet, and Air Tech Challenge series of sneakers would cement his brand of “rock-n-roll tennis” from the late 1980s well into the 1990s. 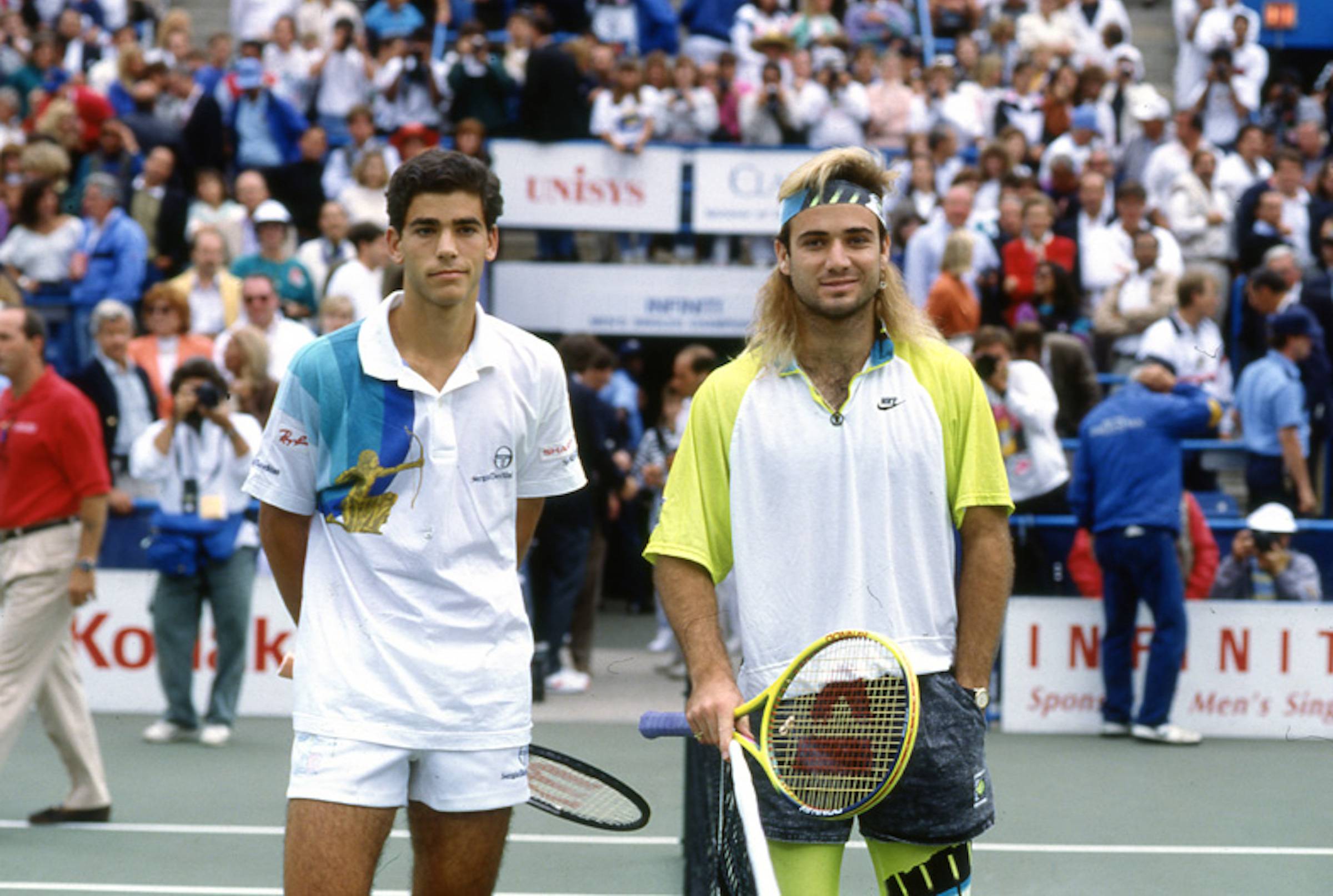 From aristocratic origins to off-court implications in streetwear, tennis has always existed as a sport that embodies an athletic and luxurious lifestyle in equal measure. Without realising, we have taken and continue to dip into fashion inspiration from tennis culture, whether its Sergio Tacchini, Ellesse, Fred Perry, Fila, Adidas or Nike, sportswear has had a bigger impact on today’s sportswear more than we would ever believe.